A birthday gift tag is something you’ll always use. I like to make a stack and tuck them away for upcoming birthdays. Do you make tags too? I think they are just as much fun to make as cards, especially around the holidays. Color-coordinated everything, I say!

For today’s project, I used the sweet little bees from the February Box to create a birthday gift tag with a “bee banner” design.

To get the fun started, you’ll need to find you a tag-shaped nesting die set from your stash. I don’t own a tag frame die, so I had to improvise! I chose the largest die in the set and the next size down as well and used a lick of Post-It® tape to hold them still.

Then, I adhered a piece of A2 sized yellow cardstock onto a small sheet of double-sided foam adhesive.

I added the tag dies over the top of the cardstock and ran it through the die cut machine. The neat thing about cutting the foam and cardstock all at once is you don’t need to try to line it up afterward and have it sticking to your fingers, desk, hair, and then accidentally tearing it and having to recut it again, then chasing the dog to peel the foam scraps off her ear… ask me how I know 🙂

After that fiasco concluded, I separated the tag dies and used the large one to cut two more tags – one from white cardstock and another from the yellow.

Time for stamping! I popped the white tag into a Mini MISTI and lined up the sentiment at the top of the tag. The ink I’m using is Nuvo Hybrid Ink in Black Shadow. Since I wasn’t sure how I was going to color the bees yet, it was the best bet as you can use it with water-based and alcohol-based markers.

To create the banner strings, I just added a few dots where I wanted them to touch the sides and used the edge of an oval die to draw a line from one side to the other with a black pen. There was no way I was going trust myself to make a presentable line freehand – I have trouble with stick people!

Next, I stamped the bees onto the string so it would seem they were attached by an antenna. Then, I drew tiny party hats on them with my pen – partly because I needed to tie them into the party theme, but mostly because you can’t have a birthday without party hats 🙂

To color up the bees, I used a few Tombow Brush Pens. There wasn’t much room to blend anything, so I chose beautiful, bright colors to fill in the small areas. For the wings, I used a super light blue and just added a bit of color with a few flicks of the tip from the body outward. Then, I dabbed on the sparkle with a clear Wink of Stella Pen. I also drew a few dots around the tag and outlined “hap-bee” with the same yellow marker as I used on the bees. Never be afraid to add doodles to your projects!

With all the stamping, coloring and doodling done, I added my foam frame over the top of the tag – top part first – then I removed the rest of the release paper to lay the bottom half in place. This particular foam adhesive is super sticky; once it touches, it’s stuck, so I needed to be super careful putting this piece in place.

To finish up, I found a nice length of blue gingham ribbon and fished that through the hole I had punched just above the sentiment.

Thank you for popping in to read today. There are still a few February boxes left in the shop, and they are on sale to boot! Hop on over, pick one up, and happy crafting! 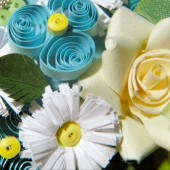