It’s Teresa from Whimsical Card Studio – I’m excited to be back for my second guest post showing another idea for using the supplies in the April 2019 card kit.  This time around I created this card primarily using the dies from the exclusive Art Impressions set. I also created a video tutorial if you’d prefer to follow the step-by-step instructions that way.

The main panel for the card front was made from the green cardstock in the kit.  I used the stem die and die cut multiple times across the panel, flipping the paper over each time so the die cut would be facing in the opposite direction.  I thought it would be fun to create something a bit unexpected so I took creative license on the placement of the flowers over the negative space left from the die cuts.  I then filled the space in between by using the positive die cuts in between the negative spaces.

I strategically placed double sided foam adhesive dots on the back of the green panel so they could not be seen from the front, then glued down to one of the pre-made card bases in the kit.

Thanks so much for stopping by! 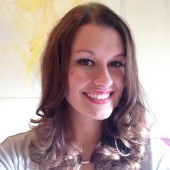 Creating a New Craft Space – How to + Craft Storage & Essentials